These and more are available at my shop.

Making my early preparations for Halloween:


You can find these and more at my shop.

It's summertime and time for some colourful and bright jewerly items.
Here are a couple you can find in my shop:


These and more new necklaces are available at my shop.
Posted by Janis at 8:14 PM No comments:

It has been a little while since I have been busy working on some new designs but I am back with some new earrings:

You can find these and other new stuff at my shop

I worked on some new jewerly designs, all created in photoshop


You can find these vintage necklaces and many more at my shop
Posted by Janis at 3:03 PM No comments:

Again I have been working on some new designs and these are the results:

All these new necklace are available at my shop
Posted by Janis at 10:18 PM No comments:

Here are some new jewelry items wich I made available

you will find these and more at my shop
Posted by Janis at 7:59 PM No comments:

I have been busy again created some new jewelry items, here are a couple of them.

You will find more in my Etsy shop

My avocado tree - growth in progress 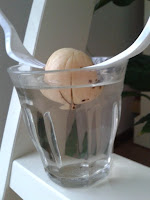 The bothanical name of the avocado is Persea americana. In December of last year I decided that I wanted to grow an avocado plant.
I stumbled upon a video from Mr EastCoastMan where he shows how to grow an avocado plant and found out that the guy behind the video lives in Canada. Canada is even colder then the Netherlands, so growing a plant like he did shouldn't be a problem.
I bought two avocados which were produced without pesticides etc., biological avocados as they call them here. I peeled of the shell from one avocado, pinned it with two forks aside of the seed and placed it in a glass of water on the 5th of December 2015.
I watched it once a week, I refilled the glass with water every week but nothing really exciting happened but a month later, on 5th of January I saw a crack in the seed. Its a little difficult the see but in the center of the bottom there is a crack and it splitting open the seed almost in half.
I am excited about the process and I will keep you posted.

Update on January 13th: Its been 8 days since my last post and today I took a picture where you can see the new root coming out very clear. I picked another glass and refreshed the water completely. 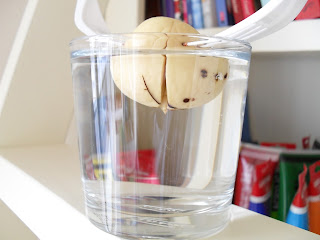 Update on January 15th: I am going to refresh the water more often, look how hard it has grown in 2 days. Before I refreshed the water for the first time after a month I only refilled the glas with extra water. 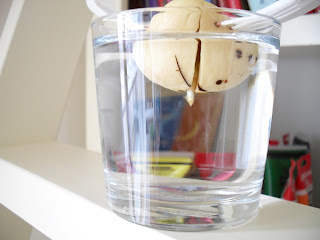 Update on January 18th: Three days later and now there is rapid growth of the root system. I haven't refreshed the water or did anything yet. 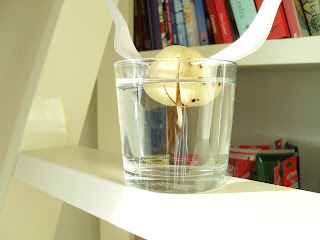 Update on January 20th: I wasn't planning on taking a picture of the growing seed but here it is anyway, my avocado tree in progress is companied by a peace lily flower. I couldn't just throw it away just yet. And you can also see the growth of the root. 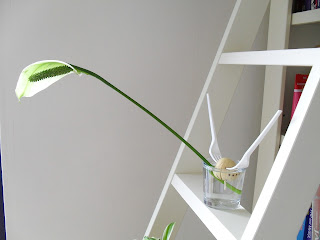 Update on January 31th: I had to refresh the water and throw away the peace lily flower. But look how it has grown, unfortunately I still see no leaves yet but the root system reached the bottom of the glass after 1 week since my last update. But It has been two months since I placed this seed in a glass with water, the leaves should have been there by now :/ 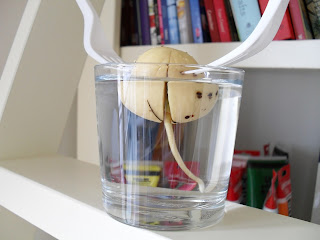 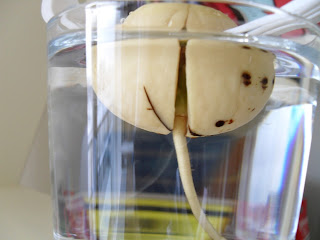 Update on Februari 16th:  This morning I only refilled the glas with water but my avocado seed finally cracked open completely today. I think its because of the sun, it's shining all day and the room temperature rised up like its Summertime .... but still no sign of leaves coming out :/ The root grows longer and longer so I stay patient. 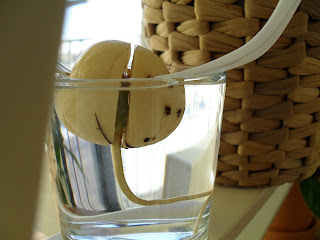 Update n Februari 20th: Yes Yes Yes, there is some growth showing within the crack, finally. Dont pay attention to the spiderplant leaf, I cut it by accident and decided to let it live further in water. In the crack in the seed you see some green coming up. But grows slowly but its there. 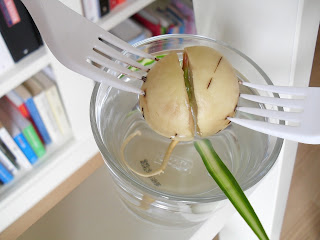 Update on March 20th: Finally a stem appeared. Its 7 cm tall and also the root system branced out. From the moment I placed the seed into water and waited until I saw a stem growing , 10 weeks had passed. 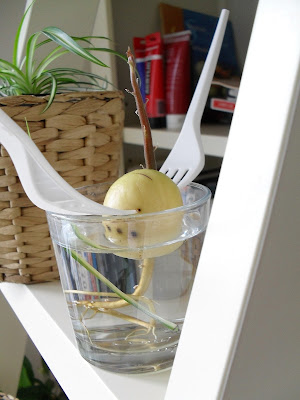 Update on March 30th: Its a fact, my plant is getting taller, The first leaves are showing. 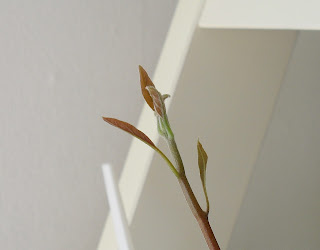 The little tree is also getting really tal in a short amount of time. Within 10 days it grew 10 cm or 4inch. At the moment the stem is 17 cm or 6.69inch tall. Its tall enough to repot it into some soil but I will wait untill the leaves are bigger and bright. 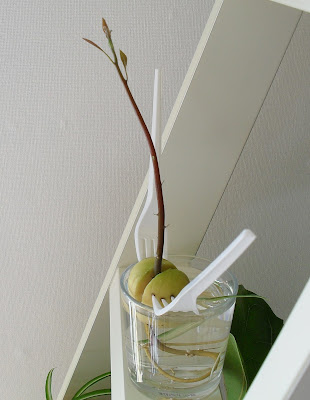 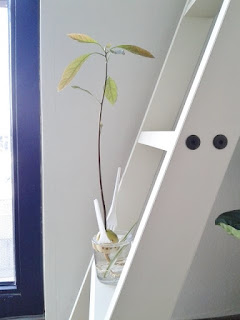 If you want to try and grow your own avocado tree, try this AvoSeedo Bowl Set.
Grow Your Own Avocado Tree, Evergreen, Perfect Avocado Tree Growing Kit for Every Avocado Lover with Plan Pot - Green & Green On March 2th I bought myself 3 bigger plants to fill the empty corners in my home and one of them is the Philodendron Monstera Deliciosa. Pinterest inspired me to buy a Philondendron and I bought for myself an 80 cm tall and wide one. There are more versions of this type of plant around but the Philodendron Monstera Deliciosa has big leaves with holes in it. They are perfect for in your home or at the office and they are very easy to take care of and it also cleans the air.I still have to repot it though. It came in a 19 cm sized pot but it needs at least a 23 cm sized pot. Finding the right flowerpot is my dillema. Watering the plant is a couple of times in the week. The soil needs to be a slightly wet without damaging the roots because of too much water in the soil. This plants also likes to grow in the shadow or half shadow.

When the 3 big plants arrived the living room immediatelly was full of plants so I placed this plant in the bedroom. 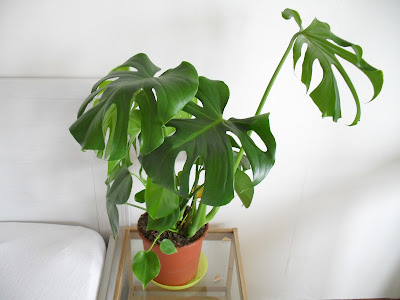 Update on June 25th:
So its 3 months later and my plant looks like this now. 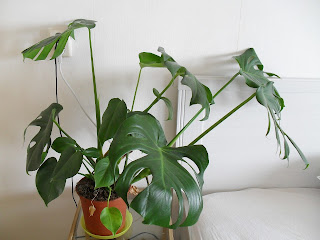 The leaves has spread their 'wings' I am not sure if it supposed to look like this but, its alive. Thats all that matters to me. Still I have to repot the plant though.

After all the fruit jewelry i have shown, it's now time for some vegetable earring studs today. It took me a couple of hourse to create the digital painting but i did it, here are the results:
U can find these in my litttle shop 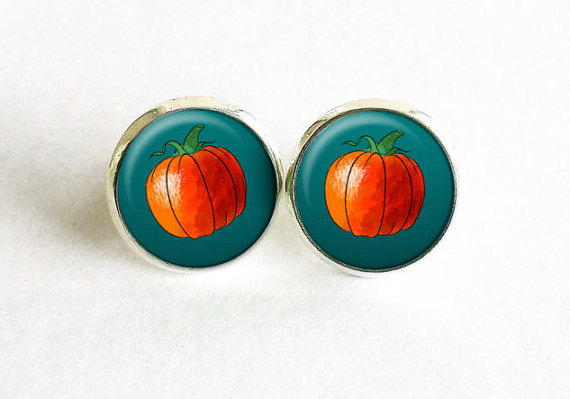 I finished a crochet bag

Well I finished my first crochet bag, I am proud of how it looks. I love to crochet but I mostly make hat tams, items for my own head and for the first time I decided to create a bag, Pinterest inspired me after I learned to create granny squares on that website.

I used 1 or 2 skeins of beige colored yarn for the base of the bag and 6 different colors for the 8 granny squares. 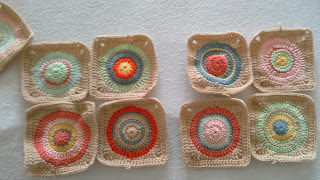 Here you see the 8 loose squares, ready to sewing them together. I sewed the 2 squares together into a bag. I crochet the strap onto the bag without cutting off the yarn first. 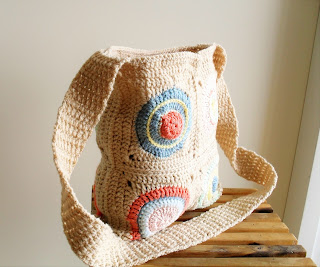 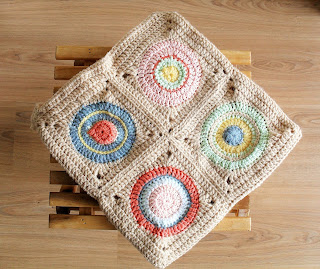 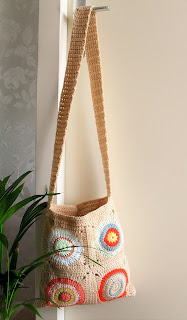 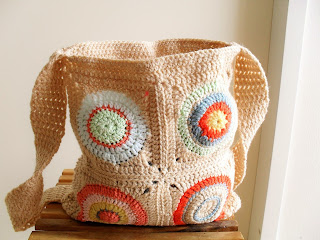 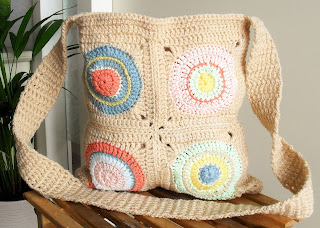 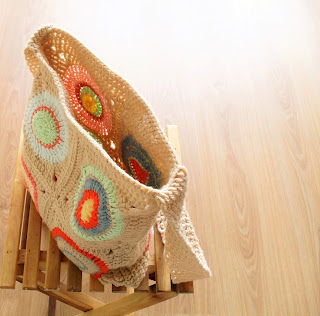 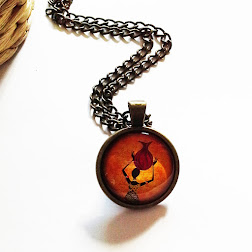 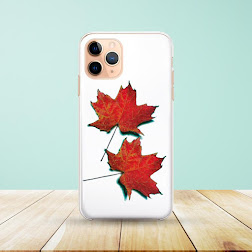